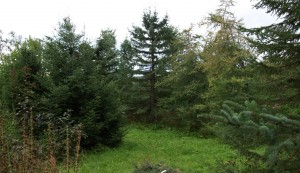 The arboretum at Malmberget which it used to be called was established in 1985 by the first Arboretum Norr manager, Carl-Gustaf Thøgersen. The purpose was to test the hardiness of plants in a truly northern climate. Gällivare municipality donated 0,5 ha of land on a slope of Malmberget which is in zone 8 in the Swedish hardiness zone map. The southern slope however makes it a good local climate.

A total of 200 trees and bushes from about 45 different species has been planted since the start in 1985. Planting was further done in 1986 finally in 1993. About 2/3 of the plants where alive at the latest inventory in 2009 so the have showed potential for surviving in this climate. 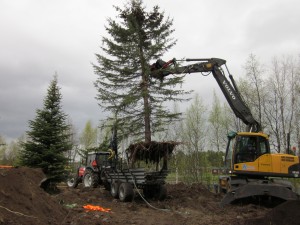 In Gällivare, mining for ore is a big part of the economy. The mines however has made the ground so unstable that the arboretum at Malmberget as well as big parts of the city has been moved. In 2011 the big project to move the arboretum closer to the city centre was started. Most of the now 25 year old trees and bushes were moved to the new location. Gällivare municipality once again donated a new piece of land but how this location will fare compared to the southern slope at Malmberget remains to be seen.