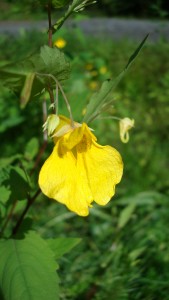 The natural wild flora in the arboretum is ordinary compared to the surrounding areas with a few exceptions. Of the herbs we have quite a big population of western jewelweed which is rare in this part of Sweden. From the sedges there is northwest territory sedge to name one. Finally from ferns we have representation from both the ostrich fern and the for northern Sweden very rare male fern.

Plant layers in the arboretum

The wild tree flora in Arboretum Norr is ordinary and consists mainly of broad-leaved trees with grey alder (Alnus incana) and birch (Betula sp.) with bird cherry (Prunus avium), rowan (Sorbus aucuparia) and further upstream big aspen trees (Populus tremula) as the dominating trees. Scots pine (Pinus sylvestris) grows in the slopes upstream from the manor and just as the aspen shows considerable dimensions. The bush layer consists mostly of young trees from the tree layer with a mixture of red currant, (Ribes rubrum) and different willows, (Salix sp,)In the field layer there are a few intresting plants to be seen. The most unusual of them is the western jewelweed (Impatiens noli-tangere), which here has one of only three known habitats in the north of Sweden (Norrland). They are well spread throughout the arboretum and in the peak of summer they bloom with yellow orchid like flowers. One of the truly remarkable characteristics of the plant is its ballistic seed dispersal mechanism, if you gently touch the seed pod when it’s ripe it will explode, hurling the seeds as far as it can. Western jewelweed is part of the same genus as busy lizzie, (Impatiens walleriana) and New Guinea impatiens, (Impatiens hawkeri), which are two very popular potted plants.One more usual plants is the lily of the valley (Convallaria majalis), which you can find in abundance in Eastern and Western North America as well as part of Europe. During the spring you can smell its scent over the area which sadly attracts a lot of people to pick the area clean. Another abundant plant is the herb paris (Paris quadrifolia), with a greenyellow flower and a big black poisonous berry. The epithet quadrifolia means four leaved but with a little bit of luck you can also find plants with five leaves. Kvarnängen also hosts hautbois strawberry (Fragaria moschata), which is probably a remnant from the manors old grow beds.

From the sedge family we have the quite uncommon northwest territory sedge, (Carex utriculata). It usually grows in the bottom of ravines and its distribution in Sweden is limited to Västerbotten and Norrbotten county. The presence of this type of sedge in the west part of the arboretum is in the southernmost part of its known range.

Among the ferns a large population of ostrich fern (Matteuccia struthiopteris) in the Western North America part stands out. These plants gives an powerful impression both during the spring and at the height of summer when they are dominating the area. Ostrich fern is common in cultivation but the wild population is quite scarce in almost all of Sweden. Male fern (Dryopteris filix-mas) however which is very common in the south of Sweden is rare in our part of the country. In the arboretum you can find a few scattered plants for example next to the pond in Kvarnängen. In the old days the roots of the male fern where used as a medicine for intestinal worms.