Work continues on an on-going basis to make Arboretum Norr accessible to everyone. 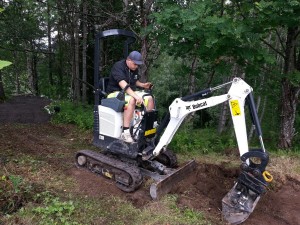 Our latest project for better accessibility is named “Lägdaleden”, it is a path that stretches about 1/2 km alongside one of the borders of the arboretum next to some big fields. This has been made so that wheelchairs, baby strollers and so on can easily enjoy a large part of the arboretum. We had both tractors and diggers at the site to prepare the ground. Then came a small bridge over a stream, some new signs and a couple of new benches. The route which goes through several parts of the arboretum starts in Siberia, goes on to first Eastern then Western North America, to finally reach Europe where it ends or starts depending on your starting-point. There are a lot of trees and bushes planted along the path, some of the most recent are; boxelder, chokecherry, subalpine fir, white spruce, ash and northern red oak.